Borehole geophysics is the process of measuring, recording, and analyzing the physical properties in water wells or test holes. Tools, or probes, that measure certain features are lowered into the borehole to collect continuous or point data. A geophysical log is a graphic display of the information. Various logs are collected from each borehole to take advantage of their combined nature. We can learn more cumulatively by the analysis of a suite of logs as a group than by the study of the same records individually.

What is borehole geophysics used for?

Borehole geophysics is used in water resources and environmental investigations to obtain information on:

What makes up a geophysical logging system?

A geophysical logging system consists of probes, cable and winches, power and data processing modules, and data recording units. A computer controls a state-of-the-art logging system and assists in real-time viewing of the measurements. Some systems can collect multiple logs with one pass of the probe.

Why do we perform borehole geophysical well logging?

Borehole geophysical logging can provide in-depth information that is critical in gaining a better understanding of subsurface conditions. This is important for many water resources and environmental investigations. Geophysical logs provide empirical, continuous, and in-situ data and generally sample a larger volume than retrieving well cuttings or coring samples alone.

The varying hydrogeologic and stratigraphic units found in the subsurface at a given site display a wide range of characteristics to store and transmit groundwater and contaminants.

Borehole geophysics provides a highly efficient means to determine the character and thickness of the various hydrogeologic units penetrated by wells and test holes. This information is essential for wellfield design, including the proper placement of water well casing and screens and for assessing and remediating groundwater contamination.

The quality of groundwater is sometimes highly variable. Human-made or natural sources may cause groundwater contamination. Integration of borehole geophysics with water-quality sampling provides a complete picture, whether the objective is to install a new water supply well or remediate a contaminated aquifer.

The common borehole geophysics tools and how are they used

Single-point resistance is an electric log that measures the potential differences due to the flow of electric current in and adjacent to a borehole. The resistance is obtained from an electrical ground at land surface. These logs are especially useful for identifying lithologic changes in carbonates where the rocks do not contain enough radioactive material to cause changes in the gamma log response. The electric logs can also be used to derive porosity within the sediment or rock surrounding the borehole. Penetration distance into the surrounding lithologic material varies with the diameter of the borehole and the type of electric logging tool in use. Porous rocks provide electrical flow pathways through the groundwater contained in their interconnected pores and register as low resistivity on electric logs. Conversely, nonporous rocks resist electrical current flow and register as high resistivity. 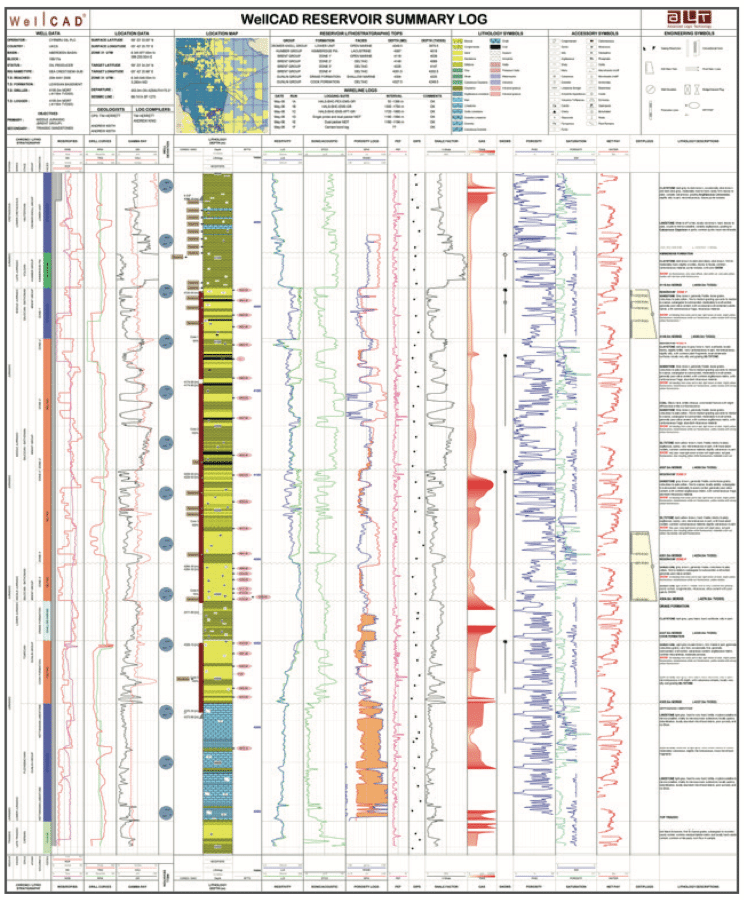 Fluid-resistivity logs measure and record the electric resistivity of water in a borehole. The nature, quantity, and distribution of the water contained in the bed controls the electrical conductivity of the bed. Changes in fluid resistivity may reflect differences in dissolved-solids concentration of water. These logs are useful for determining water-bearing zones and identifying vertical water flow in the borehole.

Electromagnetic-induction logs measure the electrical conductivity or resistivity of the sediments, rocks, and water surrounding the open borehole. Porosity, permeability, and clay content influence the electrical conductivity and resistivity of the rocks. The concentration of dissolved solids in the water within the formation also affects these logs. The electromagnetic-induction probe is specifically designed to maximize vertical resolution and depth of investigation and to minimize the effects of the borehole fluid.

Temperature logs measure the water temperature in a well or borehole. Temperature logs are useful for defining water-bearing zones and identifying vertical flow in the borehole between depths of differing hydraulic head penetrated by wells. Borehole flow between different zones is indicated by temperature gradients that are less than the regional geothermal gradient, which is around 1 degree Fahrenheit per 100 feet of depth.

Flowmeter logs record the rate and direction of vertical flow in the borehole. Borehole-flow rates are calculated from downhole-velocity measurements along with the borehole diameter that is recorded by the caliper log. Flowmeter logs can be collected under non-pumping or pumping conditions.

Video logs record a video image of the borehole. In addition to being recorded to disk, the optical image is typically viewed in real time on a monitor. Well construction, water level, cascading water from above the water level, lithology and fractures, and changes in borehole water quality (suspended particles, chemical precipitates, and gas) can be viewed directly with the video system.

Acoustic-televiewer logs record a magnetically oriented, photographic image of the acoustic reflectivity of the borehole wall. Televiewer logs indicate the location and strike and dip of fractures and lithologic contacts. The collection of televiewer imagery is limited to water or mud-filled open holes. 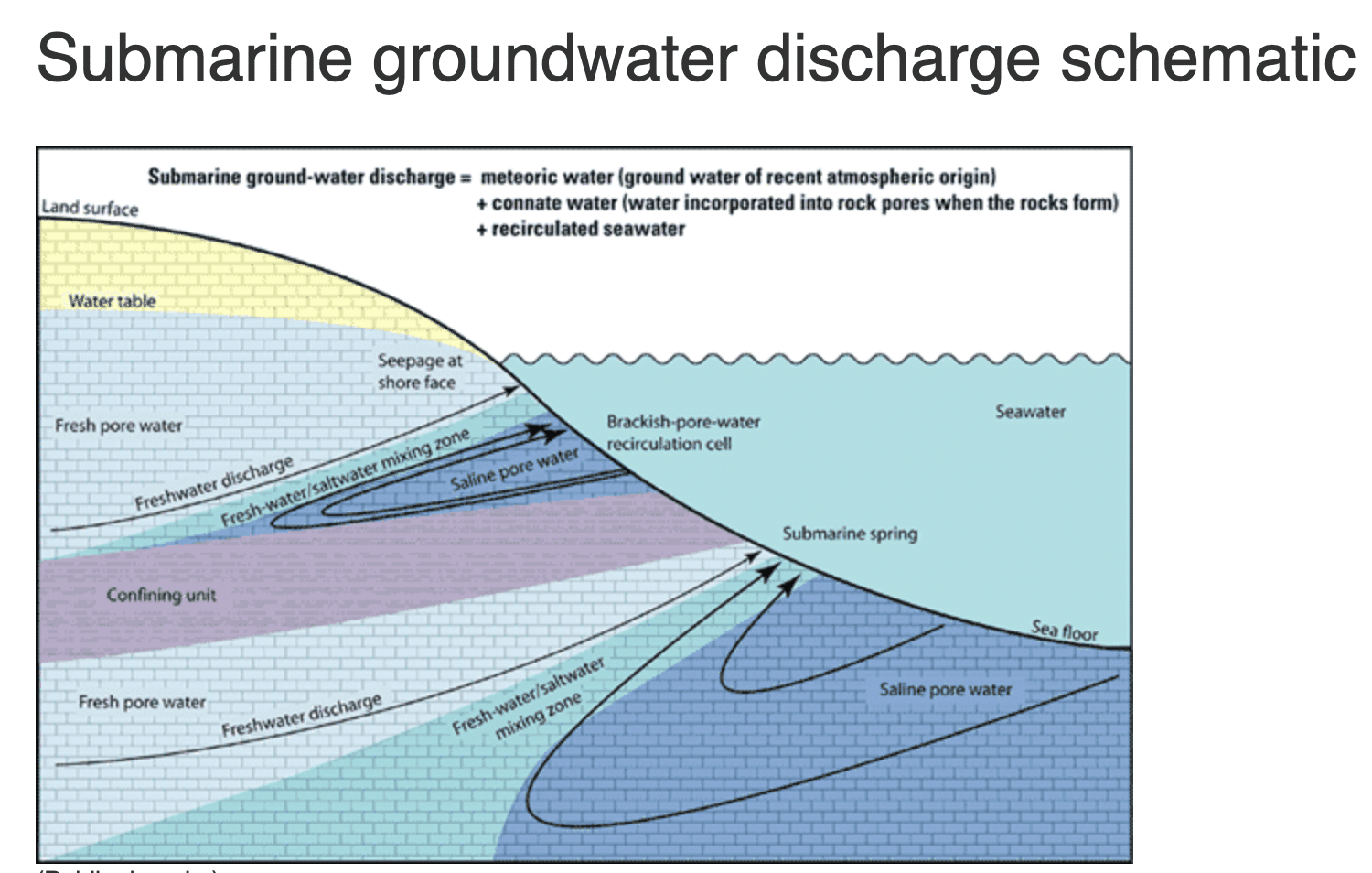 Detailed information on subsurface conditions is necessary for the development and management of groundwater resources and the assessment and remediation of contaminated sites. Borehole geophysics provides a means for the collection of this information.

Recent advances in methods and equipment have significantly increased the ability of geoscientists to obtain subsurface information in investigations through borehole geophysical techniques.

Portable geophysical loggers specifically designed for groundwater applications are available. The logging equipment is PC-based and has menu-driven software for the collection, display, and analysis of digital log data. Combining probes enables us to collect multiple geophysical parameters with a single logging run, thereby significantly increasing the efficiency of the site work.

Electromagnetic-induction logs replaced normal-resistivity logging in the oil patch a long time ago. Induction probes are designed specifically for small-diameter monitoring wells. Induction logs can be collected in water, air, and mud-filled holes and through PVC casing. Significant factors that affect induction-log response in sand-and-gravel aquifers are the concentration of dissolved solids in the groundwater and the silt and clay content of the aquifer. Induction logs, typically run in combination with gamma ray logs, are used to identify subsurface lithology and areas of electrically conductive contamination such as landfill leachate and saltwater intrusion into a freshwater zone.

High-resolution flowmeters that utilize heat-pulse and electromagnetic methods can measure relatively small vertical water flow rates in boreholes and wells. Conventional impeller flowmeters that are commonly used in groundwater investigations have a lower measurement limit of about 2 meters per minute. High-resolution flowmeters have relatively lower measurement limits, typically of less than 0.03 feet per minute. These meters can be used to measure borehole flow under non-pumping as well as active pumping conditions. Borehole flow measurements made under natural conditions can help to define transmissive fractures and other permeable zones; they also are helpful in the interpretation of fluid-conductivity logs and borehole water-quality information. Borehole flow measurements made under pumped conditions can be used to develop hydraulic conductivity profiles of aquifers.

Video cameras are regularly used in groundwater investigations to inspect the condition of water well casings and screens. They can also be used to directly view lithologic texture, grain size, and color; water levels and cascading water; and bedrock fractures. Video logs can be obtained in clear water and above the water level. Video logging systems are magnetically oriented and provide a 360-degree digital image of the borehole wall.

Acoustic televiewers provide a magnetically oriented, 360-degree, photograph-like image of the acoustic reflectivity of the borehole wall. These tools have been used in the oil industry for many years and are being used increasingly in groundwater investigations. Televiewer logs, which indicate acoustic transit-time and reflected amplitude, can be obtained from water or mud-filled boreholes. The newest digital televiewer systems allow rapid, interactive determination of fracture orientations.

Let’s wrap it up!